And then there’s back to school. Beautiful, funny, exciting back to school. As a homeschool mom, I try to create rituals that make the first day of school at home different and exciting. But, really, it’s the first day of my girls’ Friday school, “Options,” which feels like I remember school. Getting all dressed up with just the right outfit and shoes, brand new backpacks filled with brand new school supplies. Nervous excitement about making new friends, seeing old ones, and getting to know new teachers. It’s a ritual that marks growing up like nothing else.

I dropped my girls off yesterday for their first “real” days of 1st grade and Kindergarten. It was fun to see all the other families, all the other kids, all the little siblings running to say goodbye to big brothers and sisters. 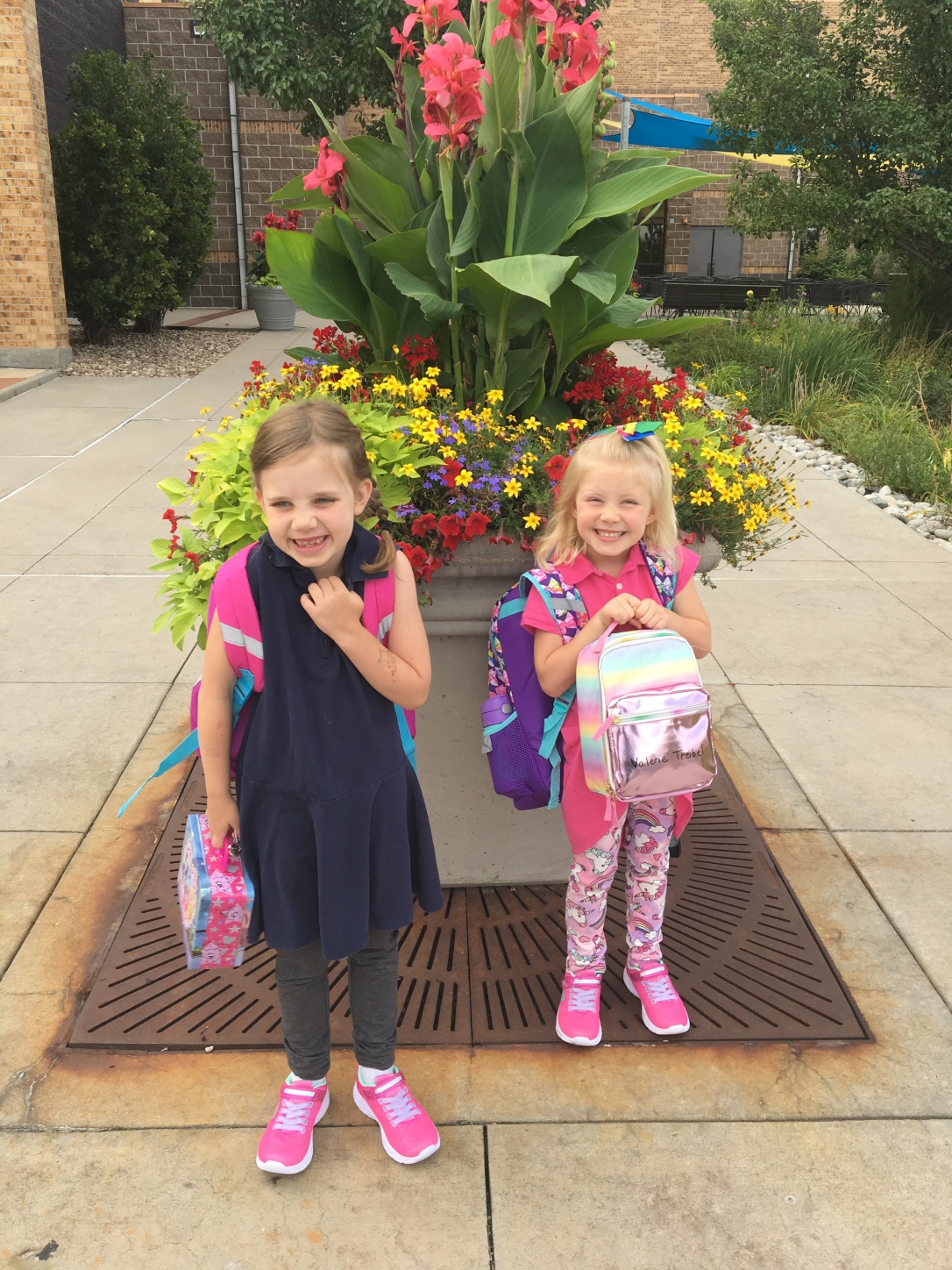 And that’s what caught my breath. Where was Elliot, giving them one last hug while they started their day? And where will he be in the years to come, when it should be his turn to wear the new polo shirt, new tennies, new backpack? He will still not be here. He’ll never be here.

It can be easy to feel isolated in the grief things like the first day of school bring. It can feel like no one around me understands or is feeling the same emotions. That’s why I’m so thankful I received these words a few days ago.

Amber is a kind, beautiful woman who helps run and facilitate the infant loss organization Walk With Me. Walk With Me has loved us with grace and understanding since we first became acquainted with them. The way the friends at Walk With Me make me feel is validated. I always feel like I’m accepted right where I am in my grief. Amber’s words below show such an amazing ability to share her own story while drawing in other grieving parents where they’re at in their own journey.

I hope you’ll read, whether you’ve lost a child or not, and ponder for a moment the sacred dance Amber describes:

On August 15th, 2008, the sonographer waved the wand across my belly. “Congratulations! It’s a boy!” We handed a sign to my one year old – “It’s a brother!” – and sent him running to his nana and grandma, eagerly waiting down the hall.

Moments later, in the same exam room, we found that Mason had severe heart defects- likely the result of a chromosome abnormality. We were told to terminate, and hope for another baby one day, for this one was incompatible with life.

Over the weeks and months that followed, as I carried my terminally ill child to term, I was told that it wasn’t just the death of my son that I’d grieve – but all of the big moments in his would have been life that I would miss out on.
His first tooth.
His first steps.
His first day of kindergarten.
Prom.
His high school graduation.
His wedding.

What I didn’t know at the time, was that I’d also grieve the in-betweens.
The art work missing from my walls.
The extra laundry piled high on the floor.
The painful silence amongst the laughter of his brothers.
The field trips.
The positions he’d compete for on his favorite sports team.
The things he’d accomplish after setting his mind to it, and working hard.
The back to school nights.
The first days of every school year after kindergarten.

Grief is different 11 years later, and as I type this, I can’t believe it has been ELEVEN YEARS. Many of you are in the first year. The second year. The third year. The years when you might feel stuck, and like the unrelenting waves of grief will surely swallow you whole. The years when you struggle to breathe, and the world goes on while you feel you are living the same nightmare over and over again, day after day.

As I dropped my boys off for their first day of 4th and 7th grades, I was struck by a wave of grief. There are still only 2 backpacks instead of 3, and I still wonder who he would have been. Would he only wear athletic clothes (shorts year round) like his brothers, or would he be the one who enjoyed dressing up a bit? Would he have cared about his hair, or asked for pickles in his lunch box? Would he be gearing up for another season of football, or maybe signing up for math club?

My life now is good and my boys are healthy, happy and thriving. Though I have experienced great loss- I also live with great joy.
I have endured the unimaginable death of my son, and questioned if I would ever find my way out of the tangled up sorrow that consumed my life for years after he was gone – but I have survived, and you will too.
Mason is one of the greatest parts of me – and I am so thankful for the life he gave me.
Living a good life doesn’t mean living a grief-less life, for the two are intertwined and mingling – a sacred dance between holding on, and moving forward.

Thank you, Amber, for allowing me to share Mason’s sweet memory. Thank you for acknowledging that packing only two backpacks still hurts. Thank you for validating the way our children in heaven shape us every day.

I wish Elliot had been there yesterday at his sisters’ first day of school. That’s a reality I can’t even imagine and yet I never stop imagining it. I see him in an empty space on the couch while I read the girls a story. I see him at bedtime, when I should be tucking in one more child. I see him a dinner table with too many empty chairs.

And I see him in my heart, where nothing can ever take him away. He’s gone, but he can never leave me. In a way, he was there yesterday, as he is in every moment of my life.

I suppose that’s why I see him everywhere.

I am a mom to two lively little girls and three babies in heaven. I choose to share the raw reality of the sorrow of loss through the filter of hope in Jesus Christ. Though it has not been the story I would've chosen, much of my writing is my reflections on being a mom of babies in heaven. Avery Rose went to heaven on January 19, 2016 at 9 weeks gestation. Everett James went to heaven on August 8, 2016 at 6 weeks gestation. Elliot William shined in our lives during 30 weeks of a nightmarish pregnancy. He was born on May 29, 2017, and died on June 3, 2017. Only heaven will heal this wounded mama's heart. I also write candidly about the struggles with faith these losses have brought me. I believe the wrestling with God is necessary and healthy as my belief system is redefined and my relationship with Him is refined. If you are reading, it is my hope that you will be moved to listen to others with deep compassion, and share your own stories of life, love, and loss with deep conviction. We are all pilgrims in a broken world; I hope we walk together as we journey to the land "where no storms come." View all posts by Heidi Treibel